You are here: Home / Blog / Grace and Grits 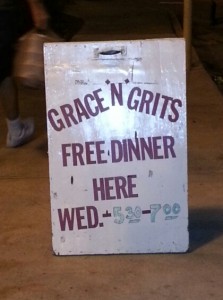 The Wednesday night meal service organized by Grace and Grits ministry under the direction of founders Ernie Manders and Bettie Sonnenberg had not yet began when I entered the civic center. It was well organized, which is to be expected since this outreach in Sanford, FL has been serving meals to the community since 1992. Manders had incorporated the help of 18 different churches, local grocery stores and volunteers, who at times utilized the charity programs offered by their employers for additional donations. On this night, Walmart had several volunteers clocking enough hours to assure a $5000 donation from the company for this event.  The program Manders runs also has a Saturday breakfast service, a free laundry and gives away refurbishes bicycles.

I take a look around at the hurried preparations that are well underway. I ask to help, but with everyone busy, I immediately feel like I’m in the way. Not wanting to deny someone a seat at one of the tables, I head for one of the few seats against the wall at the exit. I thought I would just observe as this is my first experience under my service commitment. Although a line is forming at the door, a couple of regulars had already gained entrance and one of them stops me and introduces himself.

“I’m Bill” he says, looking me directly in the eyes. I introduce myself and ask him to tell me a little bit about himself. We stand and talk as he holds my gaze and I learn that he was a regular who has been coming for more than ten years. Originally from Tulsa, Oklahoma, he begins to speak animatedly about trains and the railroad. He claims to be an expert, having worked on the railroad for many years and then studying its history in Florida for many more years  – at least fifty years all told. 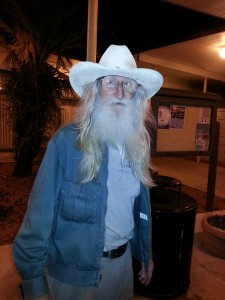 He has a sister that he still speaks with, but hasn’t seen her for a while. She used to come down from Oklahoma and visit, but not in the last few years. For the first time, Bill’s eyes drift away and he looks down as he mentions that the reason for his sister’s absence was probably because of the condition of his home.

“I have to do some work on the house ..inside and out…” he trails off, still looking down. He continues to look down wistfully focusing his eyes on the table where he had already claimed his seat. Silence hung between us, so I change the subject back to the railroad. He immediately looks back at me with bright eyes to tell me he is supposed to speak to the mayor in a couple of weeks. His expertise on the history of railroads had gained him a spot on an upcoming public speaking forum to take place at city hall. “At least,” he informs me, “that’s what the mayor said.”

I notice Bill seems to be well known to the volunteers and gets a number pats on the back and even a few hugs. I also notice another regular who was equally jovial. He told me his name was Bob and that he was a former navy officer. He had tattoos and strong features. but his body looked frail and weary. When he came close I smelled the alcohol on his breath, which may have explained, at least in part, his good mood.

However, unlike Bill and Bob, others who entered looked worried, sad, scared and even angry. The saddest person by far was the overweight man in a wheelchair. Although his age was hard to gauge, he looked to be about thirty, but it was entirely possible that he was much, much younger. His clothing was very worn and stained and he was not wearing any shoes or socks. His green pants looked to have been made by a less than skillful seamstress. An extra panel had been sown into the front section in lieu of a zipper and the pants had no waist band. It looked more like the opening of a sack without a drawstring. The man sat pushed up to the table in his wheelchair, but he never spoke a word. He ate in silence and he barely looked up or made eye contact with anyone. Unlike Bob and Bill, he never smiled.

The angriest person by appearances was a middle-aged, heavyset, black woman who boldly marched in wearing a severe frown and with at least six kids in tow. She didn’t speak on the way in or out, even though volunteers warmly acknowledged her upon entering and leaving. At the exit, I had to step out of her way or risk being “marched” over. I immediately likened her presence to a tank that was ready to demolish everything in sight, and then chastened myself. I had no idea of the “cost of the oil in her alabaster box,” so making judgments, especially on this occasion served no purpose. Instead, I turn to say goodbye to others leaving the meal service and was met with an unexpected hug from Bob.

“Thank you,” he says to me with a smile and walks through the door I held open for him. I hesitate only for a moment before catching up with Bob just beyond the exit doors out in the night air. I thought I would have another quick chat with him.

“How did you know that?”

“You told me,” I answer, a little puzzled.

Bob leans back and lighting up a cigarette, he narrows his eyes as he looks at me through the smoke.

“When did I tell you that? I must have been drunk, as usual.” He gives me something between a smile and a smirk. Was he …flirting or just suspicious?

“You told me earlier. In there.” I give him an encouraging smile and point back to where the meal service took place. Bob then gives me a “sure I did” look of disbelief, leaving me completely baffled. We were only twenty feet and two minutes from our last conversation, but Bob’s behavior had changed. Something was very different. Although it takes a moment for me to figure it out, I suddenly realize that Bob doesn’t recognize me as the volunteer he respectfully spoke to inside at the meal service. I’m a complete stranger now. The darkness, the drop in temperature, the cold wind and the look on Bob’s face tells me it’s time to leave.

I eye my car across the street, walk a little ways down the sidewalk and wait for traffic to allow me to cross safely. While waiting, I see the frowning, overweight “tank” lady in a beat-up van filled with kids driving towards me. I begin to raise my hand to wave good-bye to her, but stop short when I hear her voice for the first time yell “Bitch” as she drives by. Yes, the temperature had certainly dropped and the wind had most definitely grown cold.

Next: Lawrence and Mark