You are here: Home / Blog / Lawrence and Mark 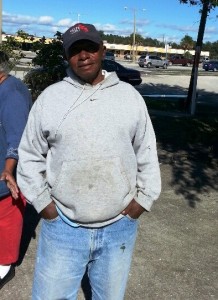 Today I decided to stand in line at the food box distribution center and talk to a few people waiting for the program to open. I first meet Lawrence Young, a regular who comes for a food box each week. For him the food he receives is a necessity. He is on a fixed income and lives with his brother, who is currently in the hospital. Although he receives food stamps, he assures me that getting a weekly food box for $5.00, or whatever he can donate, has helped sustain him. Otherwise, he would go hungry before the month was out.“There are places that will give you food to take home,” he tells me, “but if you get any food stamps, then you don’t qualify. They turn you away.”

Lawrence is not homeless, but he often finds himself relying on the kindness of others. He is quiet spoken and although his clothes are not completely clean, he looks rather neat and healthy.  He is also extremely appreciative. He only takes what he needs and refers to the people out here helping the hungry week after week as a “Godsend.”

Another person I found waiting for his food allotment was Mark. He is dirty, disheveled, missing several teeth and overall, quite the contrast from Lawrence. Although Mark looks downtrodden, his personality is very vibrant. Not long into my conversation with him, I realize Mark has a lot of stories to tell. He jumps from one thought to another and following him proves to be too difficult for me, but here are some story highlights: 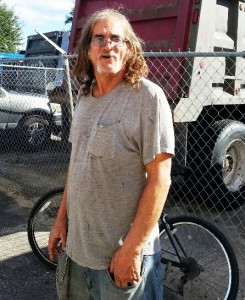 “I’m on my own and take care of myself ever since my parents disappeared….”

“I was watching a DVD and recognized my father in a movie. It was not mask. It was my Dad. The movie was Dragon and Dungeons which was filmed in Canada. That’s why I’m thinking that’s where they are right now. In Canada or Portugal….or Massachusetts.”

“No such place as Italy or Spain. That’s all a college educated story….”

“Since the Mediterranean Sea runs between Quebec and Ontario….”

Although Mark’s conversation is confusing, there are elements of truth speckled throughout. For instance, his seemingly conflicting responses to the very basic question of “where do you live?” may not be contradictions at all. When I ask Mark the first time, he points to his right and says, “I live up the road somewhere.”  When I ask later in our conversation, trying to clarify his earlier answer, he responds by pointing in the opposite direction, “I live just up the road – over there.” Afterward, I found out that Mark actually lives in the woods and both answers certainly could have been true and fairly accurate to the best of his ability.

That same night, the temperature dropped and I found myself thinking about Mark. It was near freezing out and I wondered if he had stayed outside or sought shelter somewhere. The next week I looked for Mark but did not see him. I grew a little concerned. Just one conversation and I couldn’t help but wonder about the man who lived in the woods.

I also couldn’t help but contrast Lawrence and Mark, two men who both held numbered tickets to assure their place in line for a food box. Lawrence was very thankful for what he received, but Mark seemed much less enthusiastic about the free food he was given.

“Oh, they hustle and give you what they can,” he told me, “but not really what you want.”

Next: Ways to Help