You are here: Home / Blog / Nothing Changes Until It Does

Nothing Changes Until It Does 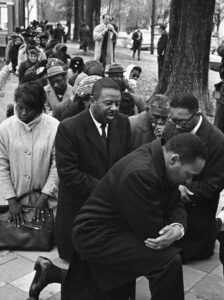 When it happened I cried. I thought about my father and I cried harder for his sake. He had died a few years earlier and had missed it. My father, who was born in 1926 Louisiana, knew firsthand about the unapologetic, brutal, southern racism that America embraced. However, he also saw racial progress as the times changed, but still, I knew in my heart that he didn’t see this coming.

It was November 2008 and America had just elected its first black president.  My tears of joy were diluted with the tears I shed thinking that my father died without knowing America would ever see such a day. A black president was unfathomable to so many of his generation who grew up in America with brown skin. I also remember feeling melancholy as I came to the realization that it wasn’t just my father whose vision of the world was seen through the lens of the racial inequities that defined our country’s history. I, his pragmatic daughter, didn’t see it coming, either. That moment taught me something, and I try to pass this lesson on to others who may need it:

On January 20, 2021, Kamala D. Harris took the oath as Vice President of the United States. She set a record for firsts as the first black person, the first South Asian person, and the first woman to reach the second highest position in the U.S. government. Kamala, a woman, is one heartbeat away from the presidency.  This time, I had envisioned that possibility without hesitation. I felt joy and pride and was able to embrace the kind of optimism that comes with progress. I was happy without the tears of admonishment.  When our new Vice President spoke later, there was a part of her speech that had me nodding in agreement like a bobble head in pearls.

“While I may be the first woman in the office, I won’t be the last. Because every little girl watching tonight sees that this is a country of possibilities.”

Later, I was speaking to someone who held a cynical world view, even as she espoused grandiose expectations for politicians who wanted her vote. She held out no hope for a better tomorrow, but I knew hope. I carried it for my entire family line – past and future.

“Nothing is ever going to change,” She declared.

“And yet, things change all the time, “I responded undeterred, “You just cannot imagine it.”

So, here’s to hope, healing, progress, and the purification of the soul of America so that we may all have the imagination to live up to this country’s possibilities.