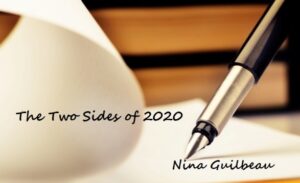 “Dear 2020, this year I will keep living my best life and smile…Happy New Year.”

With the benefit of hindsight, my first thought that I posted when I shared the memory was, “Well, this post didn’t age well.” Then I really thought about it. I decided to edit the comment to read, ”Looking back, this is a glass half empty or half full kind of post.” There was much to dislike, loathe and even fear about the previous 12 months, yet on further inspection we may be able to salvage something positive that we can take with us into the year to come.

Relationships, even very close ones were severed for political reasons.  Politics revealed a previously unknown viewpoint of our neighbors, friends and family that made these relationships tenuous at best.  The discovery of a moral and ethical great divide caused many to question their own integrity. The question changed from “Who are you? (friend, neighbor, family member) to “Who am I?  How much do we stay silent or compromise or lie to ourselves in order to keep the status quo of these relationships? There is sadness to losing or having harsh changes to those we’ve connected with, no matter how small or insignificant it seems. Many of us mourn this loss, but we should also feel fortunate that we challenged ourselves enough to experience an awakening of sorts. We learned to see people as they are as opposed to how we imagine them to be and that’s a good thing. 2020 gave us discernment in our humanity.

Social justice protests and unrest led to violence in the streets. There was the horrible death of George Floyd that was seen and felt around the world. No filter, no way to excuse or explain away what our own eyes saw. We asked ourselves and each other, “How could this happen?” Racism within our system of justice was real and for far too many, this was new information. Rather than hearing the normal lecture on racism by people who weren’t affected by the racists, honest and painful conversations about race, policing and solutions began to take place. The dark, ugly, thread of racism woven into our social fabric was now being pulled and began unraveling in a way that it hadn’t in decades. There will always be those who want to reinforce it with heavier, darker and uglier threads. However, racism, like the devil, works best when most don’t believe it exists. Too many have seen it in plain daylight and do not want to be complicit. As a result of the tragedies and subsequent protests in 2020, positive changes seem to be on the horizon. 2020 has given us action in our humanity.

Evangelical Christianity was put on a “Christianity trial” for its unyielding support of Donald Trump. His history and the fruit he brought forth were not of the nature of God, and the Lord, according to the Bible, does not approve.  (Proverbs 6:16-19…linger on 6:19) Say what you will about Trump, he is who he is and he never hid his light under a bushel. In fact, he is very boastful, proud, and has described his vengefulness (something he has become known for during his presidency) with a sense of deep satisfaction. “When someone attacks me, I always attack back… except 100x more. This has nothing to do with a tirade, but rather, a way of life!” (Twitter 2012). However, it was not Trump that was put on the “Christianity Trial,” but his most ardent Evangelical (largely white) supporters who chose to ignore or reframe the teachings of Christ in order to support their faithfulness to Trump. Many other Christians struggled to reconcile how their brethren chose to accept, excuse, defend or celebrate that which they routinely admonished within their own circles. Unfortunately, the verdict of the Christianity trial for non-believers or those struggling with their faith turned them completely away from the Church and its astonishing hypocrisy. At the same time, many believers braved the onslaught of attacks that came with speaking out, and voting against giving the president a second term. These Christians turned away from religion, church leaders, family and friends to look directly for and at God. Finding and leaning into that personal relationship with Him is always a good thing. 2020 made many stronger in their humanity.

Finally we have the novel coronavirus disease of 2019 that began to take its toll on the world in 2020. Unimaginable sickness, separation from loved ones, quarantined from everyone, rampant unemployment, mental and emotional instability, and over 300,000 American deaths due to Covid-19 invading each body by the end of 2020. With so much loss and sorrow, we rang in the New Year not only with well wishes, but with fervent prayer. Somehow through all of this we began to count our blessings knowing that with tragedy, it could always get worse.

Even though we may wish to never think about 2020 again, this year is the gate keeper to so much that we, and history, will revisit 2020 in our minds and hearts over and over again. For those who have lost loved ones, 2020 holds the last, cherished memories of them before they were sick. It holds our last memory of seeing them at all. This is when we, as a society, finally saw the invisible people who keep our society going – the essential workers- and appreciated them, perhaps like no other time in recent history. The sacrifices of doctors and nurses and all in the medical and science field made our hearts full. Somehow through all of this we began to count our blessings knowing that with tragedy, it could always get worse. We will remember the awfulness of the experience, but also take note of our resilience, tenacity and hopefulness. 2020 gave us a time when humanity was on the collective minds of everyone in the entire world.

May you rest in assurance that you will always be remembered for what you’ve taken from us and, hopefully, never be forgotten for what you’ve also given us.  The future awaits.