You are here: Home / Blog / A Racial Bias 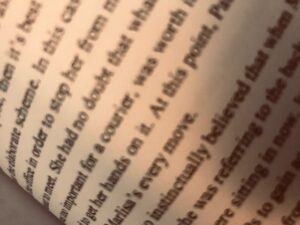 I remember getting a comment from a woman reading one of my books. She let me know that she was not pleased to find out she was reading about a black woman. She wrote that I, the writer, did not inform her of the race of the character, so she had imagined the character as a white woman. I immediately reacted like an author receiving a writing critique and wanted to check my work. Not that I am heavily invested in announcing the racial makeup of my characters, but I just thought I had given information early on about my character’s appearance. So, I got a copy of my book, thumbed through the first chapter and there it was – the character’s skin color.

Now I do not normally write things like, “She is black,” or “The African American woman.” Nothing so lacking in imagination is used for my main characters. With me, you will read about skin tones the color of maple syrup or shelled pecans or a shade of coffee with two creams. Yes, I know – food references, but I find it easiest to describe the rich variations of black people’s hues by the tremendous selection of colors found in the ordinary foods that we eat. It’s not hard to have readers “see” a character whose light skin color matches the rich, golden brown top of a perfectly baked biscuit. In the case of this reader’s accusations, I thought it was an easy reference to use caramel (and other descriptions) to let readers know that the character was a person of color. And while the main character may not have been African American, as there are other races with brown skin tones, I thought for sure no one would have to get to the middle of the book to figure out this character wasn’t white

After double checking all of my color references, I then used social media to take a look at my reader. She was white and by her postings, she seemed to be an avid reader. So, I re-read her email and reacted as a fellow reader. I know how irritating it is to visualize a character looking one way and find out later with the author’s description that you were way off. Finishing the book then means you must reimagine the character and sometimes, as petty as it sounds, you might not like that newly imagined character as much.

However, that was not the nature of this complaint. The reader felt she was tricked (her word) into reading about a black woman because of the way my character acted and spoke. Her preconceived notion of what acting and speaking “black” is what led her to be surprised to discover that the caramel colored woman in the book was not the white woman she had imagined. She did not finish the book and she wanted to let me know that and … I have no idea why. Besides the ridiculousness of it all, it’s really sad that she needed to cling to such a small world view even in her imagination.

Now every reader is entitled – no, encouraged to read about whatever characters they want to invite to live in their minds. However, every writer is entitled to create characters of any race, color and dialect that fit the storyline.

Alice Walker wrote in her book The Color Purple: “I think it pisses God off if you walk by the color purple in a field somewhere and don’t notice it.” I feel the same way about the beauty in diverse people, and cultures… and in life.