You are here: Home / Blog / The Real Birth Order Theory 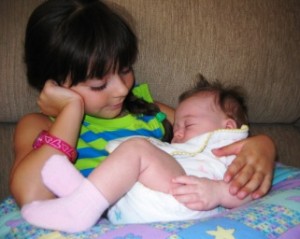 Alfred Adler’s birth order theory is absolutely fascinating. So fascinating that while this theory wasn’t the biggest focus for Adler in his work, it is the one part of his work for which he is generally recognized.  Unfortunately, this widespread popular theory is also a very misunderstood.

Usually, when the birth order theory is discussed the spotlight is on the type of personalities created because of the order of birth (although there are many exceptions).  It’s easy to focus on this part of the theory when first, second, middle, only and last born children in different families often have the same characteristics. However, what are usually left out of the birth number to personality trait ratio are the importance of the child’s environmental influences and their innate interpretation of their birth order. Adler’s belief is that a child’s personality due to his or her birth order depends largely on the child’s internal processing (acceptance/rebellion of expectations) and the external family social environment (household), not simply the sequence of their birth.

For instance, personality traits of responsible, authoritarian (bossy) and over achiever generally describe firstborns in theory and are often proven to be the reality. Why? Because the environmental factors that Adler refers to are the same across households. When an only child is dethroned as the baby, they are subsequently crowned oldest sibling who has duties. Parents celebrate the importance of their firstborn’s new role as big brother or sister by praising how well they help take care of the new baby. This tactic is usually meant to combat feelings of jealousy or displacements from the arrival of the new baby, yet the responsibility of the role never goes away. In fact, it usually increases over time and even follows them into adulthood. Oldest siblings become surrogate parents, as well as babysitters, cooks, protectors, role models and teachers.  It’s easy to understand how the predictable behavior of parents with firstborns produces predictable personality traits in children in different households.

So the question for those with sibling experience is this: Are parents parenting to the birth order, molding general personalities, as much or more than they parent the individual child? In other word, would the youngest siblings, who are often accused of being spoiled and “getting off easy,” be the responsible, overachiever if they were treated as firstborns?

When writing God Doesn’t Love Us All the Same, I thought about the personality type of my main characters. Vera, the old homeless woman, was an only child, but circumstances made her one Adler’s birth order exceptions. Janine, the other main character, was one of three children exhibiting characteristics from one of these classic birth order categories:

Only child – This child is always the center of attention and since they are never “dethroned,” they can be self-centered. They miss out on the social skills learned by sibling interaction, so they may find it difficult to share or compromise. A great positive trait is that they can be very mature intellectually.

First Born – They are often given responsibility for younger siblings and may take on the role of a surrogate parent. Firstborns may become overachievers in order to set the example for younger siblings and meet the expectations of parents. They are also known to be authoritarian (or bossy). A great positive trait is that they can be very responsible and possess leadership qualities.

Second Born – Independent and competitive, especially with the oldest sibling. Sibling rivalry may be initiated by second born children as they struggle to identify their role in the family. They can be seen as rebels at times. A great positive trait is that they can be very expressive and creative.

Middle Child – Independent, but unlike second born children, they can be more congenial. They do not have the spotlight, but often do not seek it (what’s the use?). The middle child syndrome can develop, especially in larger families. A great positive trait is that they can adapt and acquire very good social skills.

Last Born – Frequently spoiled by the entire family. Never “dethroned” and may be accustomed to always getting their way. They may be seen as irresponsible and a rule breaker. A great positive trait is that they can be very charming and adventurous.