You are here: Home / Blog / The Unexpected 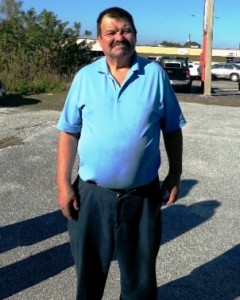 When I came to the food distribution center preparing to spend about 6 hours on my feet, I was met by Rogelio. I had never seen him before and was quite surprised when he grabbed me and hugged me. He thanked me for coming to help out and we got to chatting. He had a very heavy Spanish accent and even though I had to ask him to repeat himself, he kept the most pleasant demeanor. He was genuinely happy to be there and happy to get the help that our program offered. He spoke about God and the Espíritu Santo and about his family. He said he had been a part of a nearby church for many years and was trying to make enough money to bring his family over from Mexico. When I asked how long he had been trying to get his family legally into the US, I was surprised when he responded “twenty four years.” I immediately thought I misunderstood him, so I repeated the question and he repeated the answer. He told me he still goes back and forth from the U.S. to Mexico, but that he hadn’t given up hope. He said he was grateful to God for all that he had been blessed with no matter what the circumstances. Our talk lasted less than ten minutes, but the after affects are still with me today, especially because of what happened that day. When we parted, Rogelio gave me a big smile and said to me for the second time, “God bless you.”

Thus far I had always spoken with those that showed some level of appreciation for the volunteers and the program. Unfortunately, on this day I was introduced to the other side. Those who forgot everyone working hard on their behalf were volunteers, not paid service workers. Those who made demands and acted as if participating in a program that allowed them to pay  $5.00 for a box of food that contained at least $150.00 worth of groceries was a right as opposed to a blessing. Those who were angry to be told to park in the adjacent parking lot, rather than directly in front on the grass so as not to block the entrance and clog up the narrow street for thru traffic. I was amazed that the big complaint was “we didn’t have to do this before.”  That day tempers were also flying because in an effort to be more organized and not have a mob standing around the tables, we asked them stay at the front entrance until their group of numbers were called.  We were bringing them up ten at a time. This request didn’t seem unreasonable as I have often waited for my number to be called in a number of businesses. However, this change along, with the enforcing the parking rules apparently insulted a lot of people. I was bewildered, amazed, disillusioned and finally frustrated. Why should I waste my time and energy trying to help people that yelled, complained, demanded and in some cases verbally abused those working on their behalf?

When a woman held up the line because she didn’t want the type of bread she was given, she gave it back and expected us to search through unpacked food boxes to accommodate her specific bread request. I froze and just stared at her. Some one behind her yelled “Can we go now? We don’t care what kind of bread we get.” However, that barb didn’t move her, she resolutely folded her arms.  I continued to stare at her, rendered speechless by her audacity. A more experienced worker quickly exchanged the bread she had for another type in a nearby box and told her that was the best we could do. The woman kept her arms folded and didn’t move, so the volunteer told her that while we do our best to accommodate requests because of food allergies and such, the boxes that came to the front were already packed for distribution.

“Well, I want the bread I like to make sandwiches,” the woman said looking pointedly at the other volunteer.

Then go shopping at a grocery store, was right on the tip of my tongue, but thankfully, the other volunteer responded first.

“We can’t customize each box,” she said. “This is just food to help supplement you for the week. I mean, we give you a lot of the basics, but you sorta get what you get. If you can’t use everything in the box, then try to bless someone else who might be in need.”

The lady smirked and took her box just as an argument broke out between two men about the parking situation. Really? I looked at the nearby parking lot with so many available, close parking spaces and I couldn’t even begin to comprehend what the problem could possibly be.  My exasperation increased when I saw one of the volunteers crying because she had been verbally abused by a woman who was angry about the long wait. It was one thing after another, ranging from the ridiculous to the outrageous. Suddenly, I began to think that maybe volunteering at the center wasn’t right for me. I could take the time consuming manual labor, but the people stress was something I hadn’t bargained for at all. I felt overwhelmed and underappreciated.

I had all but decided to quit when I thought about Rogelio. His hug, his demeanor and his words of general thanksgiving made me smile. I had never seen him before and yet on that day, he was exactly who I was supposed to see to say exactly what he said to me. He reminded me that it wasn’t about me or about the lady holding up the line or all the complaints and fights and anger that I had endured that day. It was about doing good things for others and doing them for the right reasons. By the time I got home, soaked the soreness away in the tub and settled in for the night, I was no longer thinking about the negative things that happened or about quitting. I was thinking it was a good day. A lot of people were helped and a lot of children would eat. That’s why I do it. So, thank you Rogelio for your inspiration and may God bless you, too.