You are here: Home / Short Stories / Being Non Famous 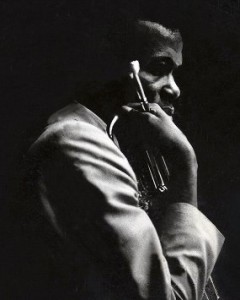 Published in the Orlando Sentinel as a Father’s Day tribute. The full version was published in the anthology, From Our Family to Yours, under the title A Lifetime of Music.

I watched my 78-year old father toting his beloved trumpet up the walkway. Ever since my mother died, he seemed lost unless he had his trumpet. His children were grown and had left one by one. Then his partner of more than 50 years left him, too.

Only music, his first love, stayed.

For Phillip Guilbeau and his trumpet, the past held a lot of great memories. He had performed and recorded with the great ones — Frank Sinatra, Count Basie, Otis Redding and for a great deal of his career, Ray Charles. I had heard the repeated tales of his travels and I knew he reveled in entertaining us with them. I wanted to write them down, in his own words to preserve the essence of who he was, for his grandchildren and their grandchildren to read. So I requested an interview and he, carrying his trumpet, came. I asked about his description as Ray Charles’ discovery on the Genius + Soul = Jazz album. I asked about his traveling amid racism in the Deep South with Big Joe Turner. I asked about his solos and the standing ovation streak that started a backstage pool. I asked, he answered and I listened. I discovered more in one attentive afternoon about Phillip Guilbeau, the man, than I had in a lifetime of knowing him as Phillip Guilbeau, the father. Thinking back, I wonder why I never saw the similarities between us. Maybe, I didn’t know him as well as I thought. Or maybe, I didn’t know myself that well, either.

My father fell sick and passed away shortly after that interview. I cherish the one recorded session we had and I smile whenever I listen to it. No matter how often he repeated a story, he never failed to laugh in the same spot or pause in the same place for dramatic effect. He had a gift.

Because he recorded hundreds of songs with various artists, I hear his trumpet everywhere. Each time, I pause — knowing that others hear him too. They don’t know that the masterful musician was also a good father and a good man. He is the most famous “non-famous” person I know. I learned in our interview that he chose to be “non-famous”, rejecting opportunities rather than sacrifice his family. He put us first and I grew up feeling his love. I am truly thankful.