You are here: Home / Blog / Ladies DO NOT Dull Your Shine

Ladies DO NOT Dull Your Shine 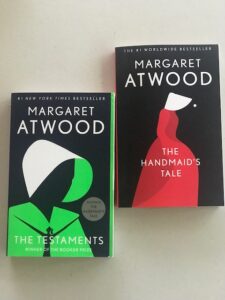 I have finally tamed the chaos in my day-to-day life so that I can now indulge my creative side again. The more I read, the more I am inspired to write, but until recently I haven’t had the time or the concentration to do either. However, I am now productively working on three manuscripts, two podcasts, and always in search of an interesting book to read and discuss on one of my new podcasts – WFC Book Discussions. (This podcast will launch fall 2022.)

I told a friend how I was interested in finally reading The Handmaid’s Tale as the author has been credited for one of the most thought-provoking quotes I’ve ever heard.

She gifted me a copy of it along with Atwood’s follow up book, The Testaments, and I have happily began reading. (So, thank you, MC). In light of previously restrained religious beliefs resulting in the oppression and persecution of women gaining strength, I felt like the book would resonate differently with me. However, it’s not just the abortion rights issue, that is on everyone’s mind.

(For the record, I do not feel (even as a Christian) someone else’s religious belief and/or interpretation of religious doctrine should be legally forced on anyone and circumvent their civil rights. I do not want to wear a burqa for that same reason.)

It’s also the oppressive language of a women’s role from mega church leaders such as T.D. Jakes. He is not the only one preaching an antiquated, misogynistic world view, he is just the latest. Apparently, women are too independent and that’s why families are breaking up. Evidently, women should make themselves more needy in order for men to have something to offer them. Shrink themselves so that men can feel bigger. While you’re at it ladies, ask stupid questions so that he can feel smarter. Never beat him in any game, even checkers, so he can feel superior. You just smile, be pretty and lady like (not aggressive or tough). Don’t climb the corporate ladder or be who you want to be because it may offend a man who can’t compete. Just wait on a man to take care of you and the kids…even if he can’t…or won’t…even if a man never comes…you just wait right there.

So, from the pulpit, we should teach our little girls that to be a good woman she must take responsibility for a man’s fragile ego and wandering male appendage and let’s see what else…? Oh, yeah pregnancy itself. How many times have you heard someone say a version of, “If a woman doesn’t want to have a baby, then she shouldn’t get herself pregnant?” (Yes, I’ve heard the “get herself pregnant.”) I don’t even want to discuss how that must sound to a rape victim.

Is this what we really want to teach our little girls? Don’t shine? You can’t do or dream or control your life? This way of thinking is taught in the name of Jesus, so it must be right, right? Umm…

Question: When are men going to start talking to men and making laws for men about their role in all that seems to ail the hardened religious faction in this country?

Answer: On the 31st of Nevuary, because they’ll never have to as long as it’s mostly men making the rules, making the laws, and making the responsible party women.

I think the best relationships are when a woman finds a man who complements her to make her better, not when she needs a man to complete her as if she’s defective. She should already be whole and if he pours more into her and her cup runneth over, the more she’ll have to pour into her children…and back into her man. Now go and preach that.